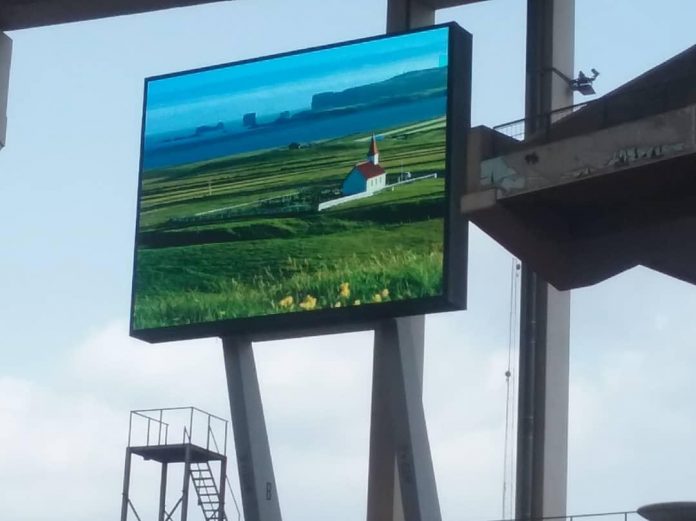 The Video Assistant Referee (VAR) compliant scoreboard at the Moshood Abiola Stadium Abuja has been fixed.

The scoreboard was test run on Monday June 14, 2021 after being restored by the engineers.

A top official of Aron Nigeria Limited, the Lagos based Construction Company contracted to renovate the MKO Abiola National stadium in Abuja confirmed that the new scoreboards installed at the stadium are Video Assistant Referee (VAR) compliant and top quality that will stand the test of time.

The official, who spoke to BSN Sports on condition of anonymity, also disclosed that the delay in restoring the scoreboards was as a result of some of the equipment at the sporting edifice that were vandalised.

A senior staff from the Ministry of Youth and Sports said the focus will be shifted to meeting up with the June 30 deadline for the readiness of the regrassing of the pitch.

Our correspondent, who visited the stadium last Friday, observed that the former grass on the football pitch was completely hauled off while digging of water passage was being carried out.

“This renovation is in two phases and as we all know, it involved the regrassing of the pitch, repairs of the water sprinklers as well as the scoreboards and its accessories.

“The fixing of the scoreboard has been completed and now the regrassing will be delivered at the end of this month.

“The soft sand is used to prevent the 6 inches grass from being waterlogged.”

Speaking further, he revealed that the grass, Platinum TE Paspalum is the same type FIFA has approved for the 2022 World Cup in Qatar.

According to him, Julius Berger, who constructed the stadium in 2003 used Pure Dynasty Paspalum grass which is out of use for modern stadium.

He also explained that the grass didn’t create enough space for water passage but was quick to say Julius Berger used the technology available at that time.

According to him, the regrassing will be completed soon and the Super Eagles will return back to Abuja for their international matches.

It will be recalled that Africa’s richest man, Aliko Dangote, had earmarked $1 million for the renovation of some parts of the 60,000 capacity stadium, which had gone from a monument of national pride to a site of national embarrassment.

Market volatility and how to handle it in forex trading