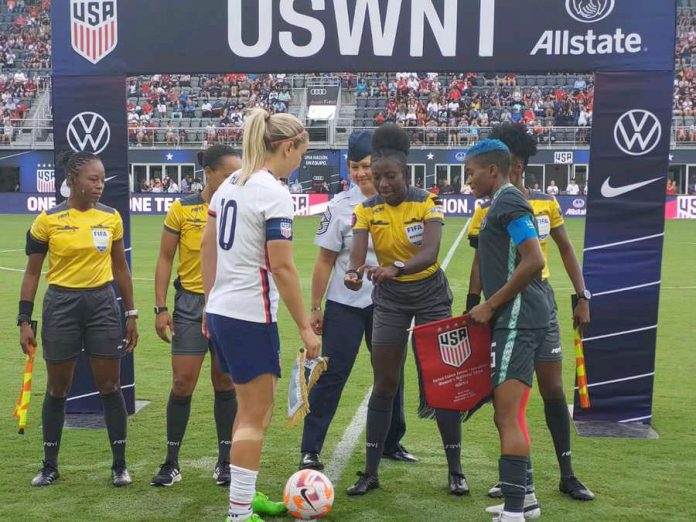 Nigeria’s Super Falcons having conceded four goals in the first leg of the friendly match put up an impressive performance in the early hours of Wednesday in the second game against the World champions, the United States Women’s National team.

The 9-time African champions had in the first game on Friday lost 4-0 at the Kansas City stadium .

With two U20 players drafted into the team as starter, they showed character and discipline in the second match played in Washington DC despite losing 2-1.

In the keenly contested encounter, the Americans took the lead in the 25th minute through an own goal from the Nigerian defender Tosin Demehin.

The Yankees ladies pressed to add more goals but Super Falcons goalkeeper, Nnadozie Chiamaka stood her ground to deny them and kept the first half scoreline to end 1-0.

The Nigerians returned in the second half as the better side and their efforts paid off early enough with Uchena Kanu scoring a leveler in the 49th minute.

Lavele scored the winning goal for the host in the 67th minute through an header to end in a 2-1 win for the World champions.

Why Is It So Hard to Acknowledge Fathers’ Mental Health?

These 4 Laws in Egypt Must Change: Activists

Why Arsenal should not give into alleged high wage demands of...