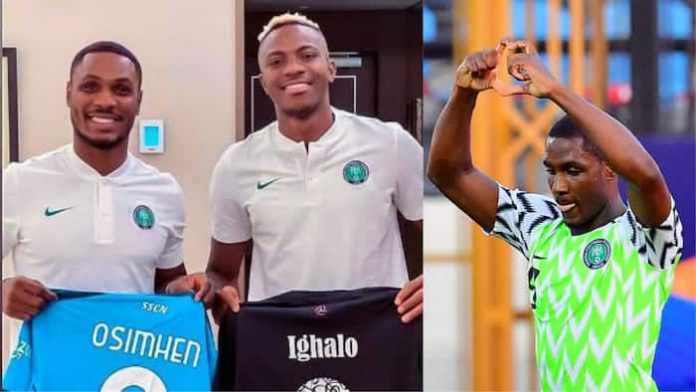 Super Eagles returnee, Odion Ighalo was spotted partying with friends and close aligns after his sloppy outing against the Blue Sharks of Cape Verde at Teslim Balogun Stadium, Surulere, Lagos.

The erstwhile Manchester United goal getter, received series of backlash from soccer loving Nigerians who rated him below average, seemed not concerned with the plight of the home fans as he was spotted dancing to a Nigerian hip hop music.
Ighalo, took to his Instagram fields to showcase his dancing skills at a party held after Nigeria’s tension soaked one-all draw against desperate Cape Verdeans.

The striker, in the shorts Instagram video was seen championing the get-together with friends who derived pleasure pooping various alcoholic drinks while dancing to a loud hip pop song.

Super Eagles manager, Gernot Rohr in a post match interview, however defended the striker’s poor showing on his return saying; “Nigerians need a little patience with Ighalo. He was not with us for more than one year, and we need time to find harmony, and I think he did some interesting things with Osimhen, we will grow and learn a lot.”

Italian Serie A: Ademola Lookman Reveals Reasons For His performance

Krobea Asante School: Committee to be set up to probe vandalism

World Cup Qualifiers: Playing In Lagos Will Bring The Best Out...