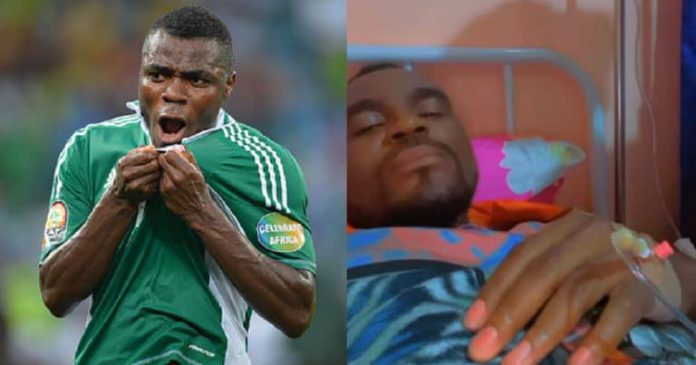 Former Super Eagles striker, Emmanuel Emenike, has taken to social media to share a video showing him in a sickbed. In the video posted on his verified Instagram page in the early hours of Wednesday, the footballer complained about “too much” pain.

In the short and muted clip, the hunky striker laid on a hospital bed with a cannula embedded into the back of his palm while he was being administered intravenous fluids by a medic.

Hours later, Emenike took down the post from his page. Before it was deleted, the post had garnered several well-wishes from former Super Eagles teammates like Ogenyi Onazi, Vincent Enyeama and Nwankwo Kanu, alongside many star entertainers.

Emenike made his international debut in a friendly against Sierra Leone in Lagos in February 2011. He would get his first goal for Nigeria in a 4-1 mauling of a second-string Argentina side in Abuja later that year.

He was the top scorer at the 2013 Africa Cup of Nations (AFCON) in South Africa, helping Nigeria lift its much-awaited third continental trophy.

Demolition at Frafraha painful and cruel – National Tenants’ Union to...