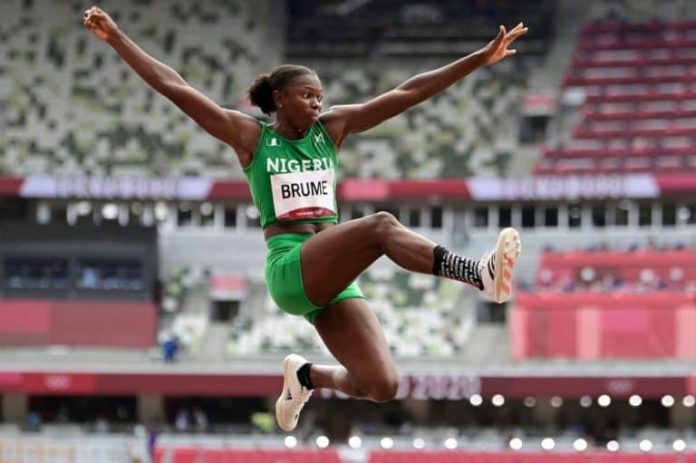 World and Olympics long jump bronze medallist Ese Brume tops the list of six athletes the Athletics Federation of Nigeria, AFN, has announced for the World Athletics Indoor Championships which runs from 18-20 March, 2022 in Belgrade, Serbia.

Others on the list are Ruth Usoro, the reigning NCAA indoor champion in the triple jump and the 4x400m quartet of Sikiru Adeyemi, Ifeanyi Ojeli, Nathaniel Samson and Timothy Emeoghene.

Brume, competing in her first World Indoor Championships will be aspiring to become the second Nigerian woman after Glory Alozie to win medals at both the indoor and outdoor World Athletics championships.

Brume has not competed indoors since February 2020 but the 25 year old who set a new 7.17m African outdoor mark last May will be Nigeria’s biggest hope for an indoor medal this year.

Usoro, like Brume will also be competing in her first World Indoor Championships a year after conquering the NCAA indoors and outdoor.

Unlike Brume, the 24 year old has competed indoors this year and will be in action this weekend at the NCAA Championships in Birmingham, Alabama where she will be hoping to add the long jump title to the triple jump she won last year.

The late Sunday Bada remains the only Nigerian to have won multiple medals in the history of the championships after winning silver medals in the 400m event in 1993 and 1995 before becoming the first Nigerian to be crowned World Indoor champion in 1997 in Paris, France.

Police’s challenges with crowd control must be addressed – Security analyst

“I might end up Marrying myself” Reality Star, Whitemoney says

Explanations provided for substitute Rodrigo being hauled off & Liam Cooper...