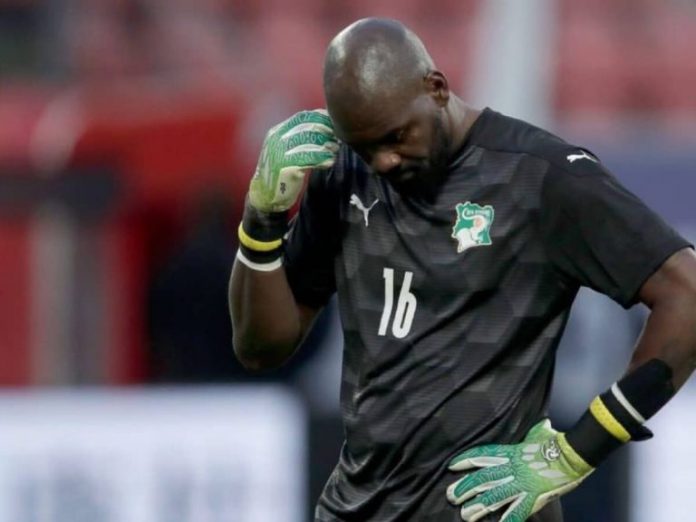 Ivory Coast has been hit with a major blow ahead of their first AFCON 2021 game as first-choice goalkeeper, Sylvain Ghohouo has been banned by FIFA following a doping test failure last November, Sportivation.com.ng reports.

A FIFA spokesperson confirmed the ban on the Ivory Coast Goalkeeper to AFP on Tuesday.

“FIFA can confirm that its Disciplinary Committee has provisionally suspended Sylvain Gbohouo on the grounds of doping”.

The Elephants coach, Patrice Beaumelle, also confirmed the ban on Tuesday when he spoke during his press conference ahead of their game against Equatorial Guinea in Group E.

“He tested positive after the game here two months ago and we appealed immediately.’
“That was the end of it, but then he tested positive in November, although they didn’t find what medication caused it.

“We all support him. He has been training on his own, has not been sleeping or eating, and has lost weight.

“We were hoping for a positive outcome but I discovered last night that FIFA were upholding the ban and that we have 20 days to appeal, which we have done.”

Ghohouo was the Ivory Coast first-choice goalkeeper at the 2019 Cup of Nations and appeared in every game but the final when the Ivory Coast won the continental title in 2015.

Anthony Joshua Returns To Ring To Face Franklin In April