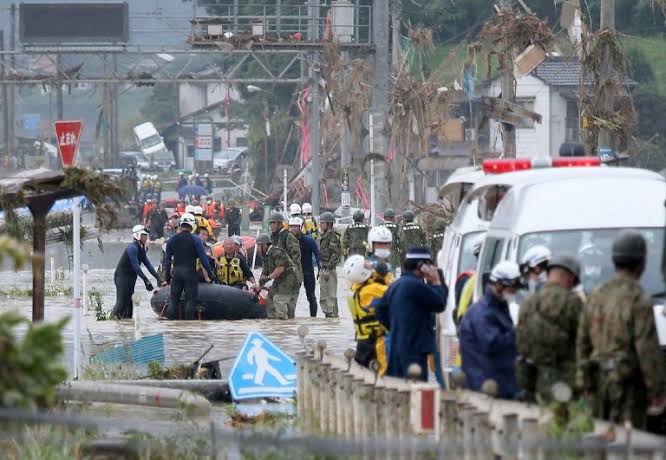 A massive downpour leading to floods and mudslides in Western Japan has claimed the lives of two people while 16 others feared dead.

This was as revealed by national broadcaster NHK and other Japanese media yesterday.

In line with the report, a woman and a man in their 80s in different towns in the western Kumamoto region died in mudslides triggered by the Japan heavy rain.

Not forgetting sixteen others as they remained in a state of “cardio-respiratory arrest”, NHK said, using a term often used in Japan before a doctor officially certifies death.

Of those, 14 were residents of a nursing home, as announced by Governor Ikuo Kabashima on Saturday.

Six others were missing, the broadcaster said.

Officials at the regional government and municipal offices, which have been directly affected by the disaster, could not immediately confirm the reported deaths.

But they said they were taking measures to prevent the spread of coronavirus at evacuation shelters set up across the region, such as handwashing and keeping distance between families.

Emergency crews and troops from the Self-Defense Forces have been out all night looking for missing people and rescuing those trapped in their homes.

Although the rain had eased in Kumamoto by Sunday morning, collapsed bridges and blocked roads due to broad flooding and mudslides have isolated many communities in the region, NHK said.

The floods destroyed houses and swept away vehicles, leaving many towns submerged under muddy water.

A large “SOS” sign was created on the ground of an abolished elementary school in Yatsushiro city, where about 10 people waved white towels at rescue and media helicopters.

Africa Is Crying For Investments – Obasanjo