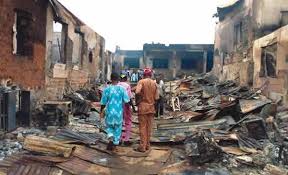 A man simply identified as Alhaji has reportedly collapsed after discovering that an early morning fire had razed his shop containing goods worth over N300m.

According to witnesses, Alhaji collapsed moments after he saw all the goods in his Choices Medicine and Supermarket Stores had been destroyed by fire.

He was said to have received two trucks load of drugs on Saturday night.

Another victim, Mrs. Modupe Daramola, said she owns a tailoring shop in the building.

The youth leader in the area, Sola Omorege, explained that they managed to put out the fire but could not remove any goods.

Omorege lamented that the state Fire Service did not heed to their calls for help.

In response to the incident, High Chief Folabi Fayehun, the Edemo of Akure kingdom, said the fire service complained of no functional fire equipment.

He disclosed that he contacted the Akure Airport Fire Service but was told it was out of their jurisdiction except the governor requested for their service.

In his words, “It’s supposed to be a case of once bitten twice shy. When we experienced this kind of incident at Oba Nla in the next street a couple of months ago, the governor was there. I think there’s a need for the government to have firefighting equipment on the ground because this is becoming a recurrent situation where people are losing multimillion naira worth of goods and property that’s hampering the economy of the state.

“This is supposed to be a social service that government should render to the populace.

“When I was talking to the member of the state House of Assembly representing this constituency IV, he said it was the government that should send that kind of bill to the House and it would be approved. I then asked why he couldn’t send it to the House himself.

“Eventually if this kind of equipment is approved for the use of the people, it is not going to be the state capital alone that will benefit.

“If the governor appropriates about N600million to fight fire incident in the state, it’s not going to be too much. If FUTA could have fire equipment, likewise Akure Airport, why can’t a whole state have functional fire equipment? This is unfair. If there’s a fire outbreak in Akure, do we have to wait for Ilesa to come and rescue us?

“See what happened to us with a whole office complex razed down without any rescue with a lot of vital documents. Now it’s the turn of the public. I think the government should be in the position to come to the aid of the people.”

EFF vows to defend Section 89 report ‘in public and in...

Defamation Lawsuit: Toke Makinwa’s Ex-husband to get 1M in Damages