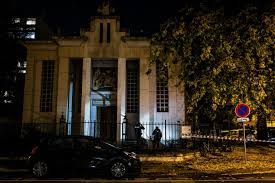 A Greek priest has been shot outside his church on Saturday, October 31, in Lyon, France.

The attack came 24 hours after a terrorist with a knife attacked many people outside a church in the Southern French city of Nice, killing three and injuring many others.

The Police is yet to pinpoint the reason for the new attack but noted that it was not unconnected to tensions over the publication of caricatures mocking Prophet Muhammad.

According to AP, the priest is in a hospital with life-threatening injuries after being hit in the abdomen.

The attacker came alone and fired from a hunting rifle.

Police has locked down the neighbourhood around the church and strongly advised the public to stay away.

Recall that on October 16, a school teacher was also beheaded in a terror-related attack.

Court allows govt to take over 410 acres of land from...

Couple reportedly conspire to sell their Children for 700k